A Survivor of Dunkirk Recalls the Battle

I came across a newspaper article regarding a 97-year-old man and survivor of the Battle of Dunkirk who went to the premiere of the movie Dunkirk. He was amazed by the visuals of the film, which brought back his own sad memories of the battle. Here's an excerpt from the Global News article:

Theatre goers watching the premiere of Dunkirk at Calgary’s Westhills Cinemas on Friday night got a surprise encounter with a 97-year -old man who was at the battle in 1940.

The Battle of Dunkirk took place during the Second World War between the Allies and Nazi Germany in Dunkirk, France.

Calgarian Ken Sturdy, dressed in a jacket adorned with medals, viewed the movie and was impressed by what he saw.

'I never thought I would see that again. It was just like I was there again,' Sturdy said.

'It didn’t have a lot of dialogue,' he added. 'It didn’t need any of the dialogue because it told the story visually and it was so real.'

'I was in those little boats picking them out of the water,' Sturdy said. He was a 20-year-old signal man with the Royal Navy helping evacuated soldiers reach waiting boats from the chaos on the beach.

'I had the privilege of seeing that film tonight and I am saddened by it because of what happened on that beach,' Sturdy said.


As the article points out, more than 68,000 British soldiers were captured or killed during the battle and retreat and over 300,000 were rescued over nine days.

Mr. Sturdy admonishes the younger generation to view the movie as an exploration of the moral implications of war:


'Don’t just go to the movie for entertainment. Think about it. And when you become adults, keep thinking,' Sturdy advised.

'Tonight I cried because it’s never the end. It won’t happen. We the human species are so intelligent and we do such astonishing things. We can fly to the moon but we still do stupid things. . . . So when I see the film tonight, I see it with a certain kind of sadness. Because what happened back then in 1940, it’s not the end.'


For the full text of the article and an accompanying video, please click here. 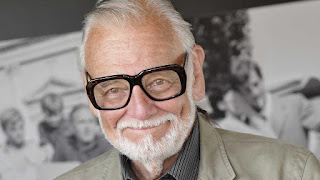 It was with great sadness that I learned of the death of George Romero. Although he has been lauded as the master of the modern zombie genre, his signature film Night of the Living Dead was also an important social commentary on the racial divide in the United States, and it is for this that I will always remember him. As a Hollywood source describes it:

Night of the Living Dead arrived at a time when American idealism was starting to sour. The momentum of post-war progress and the hope of early 60s counterculture had all but evaporated in the year of the Watts riots and assassinations of Martin Luther King Jr. and Bobby Kennedy. The film was a potent piece of speculative satire: a low-budget, tightly scripted horror film that posited as its protagonist a young black professional (played by Duane Jones) who struggles to navigate the neuroses and hysteria of his white counterparts while fending off an undead horde. The film's closing moments, in which Jones is 'mistakenly' shot by the police cleanup crew, remain one of the most stinging incidences of irony in cinematic history.


In fact, Romero had been asked to write an episode for the television series The Walking Dead, but declined, saying that the show was more soap opera than social commentary.

Mr. Romero made a guest appearance at the Ottawa ComicCon this past May, much to the delight of my son Tim, who has all of his movies and admired him greatly. My son was able to meet him and because it was nearing the end of the convention and not overly busy, Mr. Romero took the time to talk to Tim and even have a picture taken (without charge) of the two of them. Tim had ordered, through eBay, foreign movie posters of the Living Dead franchise. He took them with him to ComicCon to get autographed. Mr. Romero was delighted to view the posters, which he had not seen before. He was a kind man who made an indelible impression on my son.

The light of the horror world is dimmed greatly by his passing.