I figured it was time to take a break from evil dolls, and look at other horrors that could befall humanity. The following is adapted from a previous post on Behind the Walls of Nightmare:


Many scientists believe that tornadic waterspouts—tornadoes that form over land and travel over water—may be responsible for frog and fish rainfalls. Other scientists theorize that any unusually powerful updraft could lift small organisms or organic material into the sky during a storm. (An updraft is a wind current caused by warm air from high pressure areas near the earth rising into cooler, low-pressure areas in the atmosphere.)

Of course, if you're Stephen King, the frogs have teeth and appear in an annual rainfall to prey upon their skeptics... (See his short story “Rainy Season” in Nightmares and Dreamscapes.)

If you're interested in taking a look at frog and fish rainfall, there are numerous YouTube videos that you can google on this subject.


If you've watched The Conjuring and its spinoff/prequel Annabelle, you've heard of Annabelle the Doll.

Annabelle is a rag doll rather than the porcelain doll depicted in the two movies. It originally belonged to a nursing student named Donna--a gift from her mother. The doll was reputed to move about in her apartment and to change its poses, as well as leaving cryptic notes saying HELP on pieces of parchment.

When Donna came home to her apartment one day and found drops of blood on the doll's hand, she called upon the services of a psychic. The medium advised Donna that the doll was haunted by the spirit of a dead child named Annabelle Higgins (hence the name given to the doll).

When the doll later became violent towards her roommate's boyfriend Lou, Donna contacted demonologists Ed and Lorraine Warren. They advised her that the doll was not inhabited by the spirit of Annabelle Higgins, but was in fact possessed by a devil. At Donna's request, they removed it from her apartment.

The doll now resides in an occult museum owned by the Warrens. According to Ed Warren, Annabelle was responsible for the death of a young man who visited the museum and taunted the doll, daring it to do its worst to him. The man died three hours later in a motorcycle crash.

There's lot of reading/viewing material on Annabelle, including videotaped reenactments of its history on YouTube. 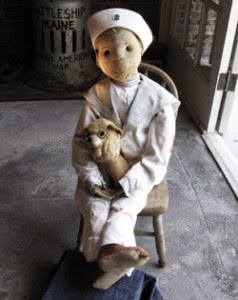 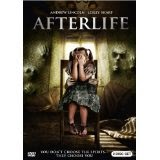 If you're a fan of Andrew Lincoln (Rick in The Walking Dead), you might also like to check out Afterlife, a psychological and supernatural British TV drama  in which he plays a leading role. The series is superbly acted, but despite its critical and popular acclaim, it was unfortunately not renewed past its second season.

Aterlife is the story of a university professor, Dr. Robert Bridge (played by Lincoln), who has lost his young son. His son's death has led to his divorce and torn a seemingly irreparable hole in his life. Bridge is a skeptic who views psychics as unscrupulous fakes that give false hope to the living while draining their financial resources. Then he comes up against what appears to be the genuine article--Alison Mundy, brilliantly played by Lesley Sharp--who would like nothing more than to be freed from her ability to see and communicate with the spirits of the dead, including Bridge's son.


Of course, the first thing you need to adjust to in watching Afterlife is Andrew Lincoln's native British accent, which one tends to forget because of how well he performs his American drawl in The Walking Dead.

Afterlife is available through Amazon.
Posted by Michael J. McCann at 00:00 No comments: