I recently came across an AMA (Ask Me Anything) in which Stephen King participated to promote the new television series Under the Dome, based on his novel and for which he is an executive producer. As usual, his comments were both interesting and humorous.  I've summarized some of his answers below:

The Favorite of His Novels - Lisey's Story

Best Portrayal of a Character in Movies Based on His Novels -  Kathy Bates in Misery and the four actors in Stand By Me, especially River Phoenix

Whether He Writes His Novels with Movie Versions In Mind - No, because it would constrict his writing.

How He Dealt with Rejection from Publishers When He First Started - "I just went on to the next story - there's no way to deal with rejection other than to continue on, banging on the door."

Whether He Plans to Write Sequels to Other Novels (as he has done with The Shining) - Probably not because he has too many new stories to tell.

Whether Digital Books Will Ever Fully Replace Printed Novels - "I like stories. The delivery system isn't as important to me as a good story. I will say this: if you drop a book into the toilet, it doesn't short out. And a lot of us read in the bathroom!"

All humor aside, it was amazing to see how many people commented on how Stephen King had inspired their love for reading or influenced their lives for the better. What more could a writer ask for?

For the full text of the AMA, please visit http://www.reddit.com/r/IAmA/comments/1gqzn2/i_am_stephen_king_novelist_executive_producer_on/.

Email ThisBlogThis!Share to TwitterShare to FacebookShare to Pinterest
Labels: Lisey's Story, Stand By Me, Stephen King, the shining, Under the Dome 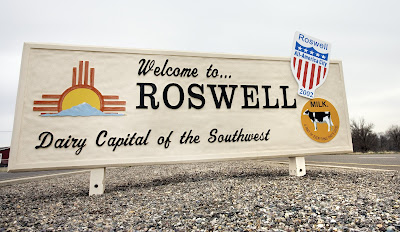 This month marks the 66th anniversary of the Roswell incident where debris was recovered from what initially was thought to be a UFO, but was subsequently described by the US Army as a weather balloon.  There were later claims that witnesses saw alien bodies removed by the military and moved to Area 51, the widely-known but supposedly top secret military installation that is a remote detachment of the Edwards Air Force Base. A 1995 "documentary" entitled Alien Autopsy was aired by Fox TV. It purported to be the post-mortem examination of an alien found at the Roswell crash site. In 2006 the  "documentary" was revealed to be a hoax. The Independence Day movie also referenced Area 51 as a holding area for captured aliens.

Due to the constant speculation about what happened at Roswell and the numerous accusations of government cover-up, various documents were declassified and two reports issued by the US Air Force in the 1990s. The official explanation states that the debris came from the wreckage of a high-altitude surveillance balloon that was part of a then-top secret Cold War project called Mogul to ensure America's readiness to detect a nuclear attack. The aliens were supposedly human-like dummies (precursors of crash-test dummies) or were actual servicemen injured in flight tests.

The incident at Roswell has spawned countless books purported to be based on eyewitness accounts. For the town of Roswell, New Mexico, it's been a tourist boom, and each July there's a festival attracting enthusiasts from around the world. For the world of science fiction, fantasy and horror, the Roswell incident and other reports of UFO sightings have resulted in some very interesting series, including the X-Files,  Alien(s), and Men in Black.

Regardless of the true explanation of what happened at Roswell, our human fascination with the potential for life beyond earth continues.
Posted by Michael J. McCann at 00:00 No comments:

Book Review of Warpworld by Kristene Perron and Joshua Simpson

Once again we are pleased to host a Tribute Books blog tour. Please welcome Kristene Perron and Joshua Simpson as we take an inside look at their novel Warpworld. 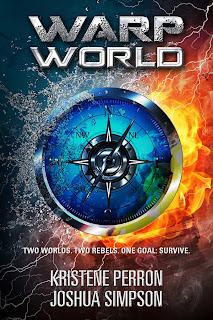 How far would you go…

On his first crossing through the warps, Seg discovers a world rich in vita – fuel to save his dying world. Cold, brilliant and desperate to prove himself as a Cultural Theorist, Seg breaks away from the recon squad sent to protect him, to scout out prime vita sources. But to find his prize he must face his biggest fear: water.

Fiery and headstrong, Ama receives an ultimatum from her people’s tyrannical overlords: betray her own kind or give up the boat she calls home, forever.  When a wealthy traveler hires her as a guide, Ama thinks her prayers are answered – until a violent murder reveals Seg’s true identity.

On the run, over land and water, hunted by a ruthless and relentless tracker, and caught in the schemes of a political powerhouse, Seg and Ama will have to strike an uneasy truce to survive.

The fate of two worlds is in their hands. 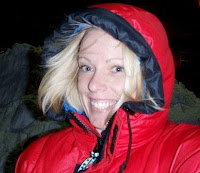 Kristene is a former professional stunt performer for film and television (as Kristene Kenward) and self-described ‘fishing goddess’. Pathologically nomadic, she has lived in Japan, Costa Rica, the Cook Islands, and a very tiny key in the Bahamas, just to name a few. Her stories have appeared in Denizens of Darkness, Canadian Storyteller Magazine, The Barbaric Yawp and Hemispheres Magazine. In 2010 she won the Surrey International Writers’ Conference Storyteller Award.

Kristene is a member of  SF Canada. Her novel Warpworld is the first in a five-book adventure science fiction series, penned with her Texan co-writer Joshua Simpson.

She currently resides in Nelson, BC, Canada, but her suitcase is always packed.

A career nomad, Josh Simpson has driven trucks through the lower 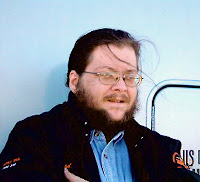 forty-eight states, treated and disposed of hazardous waste, mixed mud as a stonemasonry laborer, failed abysmally in marketing, gotten on people's nerves as a safety man, and presently gets on their nerves even more using nerve release techniques in musculo-skeletal pain relief.

He lives amidst the scrub and mesquite of West Texas, cohabiting with the writer's requisite minimum of two cats. Warpworld is his first published novel.


Our Review of Warpworld

Kristine Perron and Joshua Simpson have undertaken the co-authoring of a five-book adventure science fiction series. They are off to a good start. The co-authors have created two very engaging main characters in Seg and Ama. Their relationship develops slowly and carefully as their individual weaknesses find support in the strengths of the other.

Additionally, the two worlds in which the action unfolds are convincingly drawn, the supporting characters are interesting and amusing, and the level of detail is just right to bring the whole thing off in a fun, entertaining read.

Congratulations on your first novel in what promises to be an interesting series. Fans will be waiting anxiously for the next installment of the adventures of Seg and Ama, to be sure!

Book Review of Ghostly Summons by John A. Karr

Behind the Walls of Nightmare is pleased to host a Tribute Books blog tour. Please welcome John A. Karr as we take an inside look at his novel Ghostly Summons. 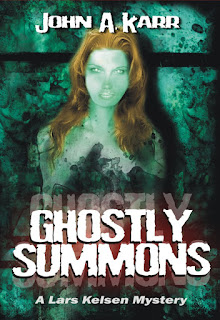 Lars Kelsen doesn’t believe in psychic phenomenon. To him, visions of murder victims are a form of mental illness. Once they begin, options are limited; he can try to ignore them or deal with them by exposing a killer. Only the latter provides any semblance of peace. Temporarily, anyway. Five years into his new life as a programmer, Kelsen—ex-crime beat reporter with a penance he can never fully satisfy—sees a victim.

Typical of such past "Visits" as he calls them, he doesn’t welcome this one. The nude form of a beautiful millionairess in his cubicle means murder has come to the vacation haven known as North Carolina’s Outer Banks. It means he’ll have to go places he'd rather avoid. See things he'll wish he hadn’t. Do things that don't come naturally, like in-your-face confrontation and bending the law. Actually, breaking the law ... but with good intent. It also means dealing with one very attractive county coroner, who pushes his buttons in a not entirely unwelcome way.

So begins Kelsen's return to investigative reporting—complete with attempts on his life, fights, deception, and all the technological tricks, such as GPS and computer hacking, at his disposal. And maybe even finding a new love interest. 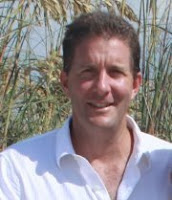 John A. Karr believes fiction writing each day helps keep the demons at bay. Ghostly Summons is his first full-length novel for Dark Continents Publishing. DCP has also published his Weird West novella, Ujahwek. He is the author of a handful of other novels: Death Clause, Hippocrates Shattered (scheduled for reprint by World Castle Publications as Shattered), Rhone, and Van Gogh, Encore. His short stories have appeared on webzines Allegory, The Absent Willow Review, and Danse Macabre. More works are in progress and in the marketing queue.


Our Review of Ghostly Summons

John A. Karr has written in a number of genres with Ghostly Summons being described as a paranormal mystery. The protagonist Lars Kelsen is haunted not only by the remembrance of his son's death, which he was powerless to prevent, but also by ghostly Visitors seeking amends for their violent deaths. He can never right the wrong of his own son's murder, but he is able to gain some relief by helping other victims of violence. In Ghostly Summons, Kelsen encounters the ghost of a woman who is slain and whose body is dumped in the wilderness. He becomes her voice in the novel by exploring the past and telling her story in the local newspaper, as well as undertaking a trek to discover her murderer. In doing so, Kelsen confronts various dangers and is presented with a number of credible suspects, and we are left guessing to the end of the novel as to the actual killer.

The novel is built on an intriguing premise and will potentially appeal to readers of both the supernatural and mystery genres. Ghostly Summons could also lead to other ghostly adventures if the author decides in the future that there are more “Visits” in store for Lars Kelsen.

CLICK HERE to enter the giveaway!
(after clicking, scroll down for entry form)

The Legacy of Richard Matheson 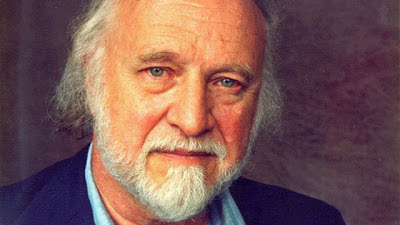 Richard Matheson has died at the age of 87, but his literary influence will continue to live on. Ray Bradbury called Matheson one of the most important writers of the 20th century. In 2012 the Horror Writers Association bestowed a Bram Stoker Award on Matheson for the "vampire novel of the century", I am Legend. This novel had three screen adaptations, as well as inspiring George  A. Romero's 1968 classic,  Night of the Living Dead. Stephen King, who cites Matheson as his greatest influence, dedicated his novel Cell to Matheson and Romero. Harlan Ellison has acknowledged his huge debt to Richard Matheson, and the younger Spielberg was indebted to Matheson for writing the story and screenplay for Spielberg's 1971 film Duel. More recently, Joe Hill and Stephen King co-authored a story entitled “Throttle,” which was inspired by Matheson's story. Matheson adapted Edgar Allan Poe stories for film director Roger Corman and wrote 16 episodes of The Twilight Zone.  He also wrote the screenplay for the movie The Incredible Shrinking Man, which was based upon his novel, originally entitled The Shrinking Man. In addition to his well-known novels, he was credited as a writer on at least 80 film and television productions over his career, which spanned seven decades.

Matheson saw the potential for horror in everyday life and once stated that there were "no crypt[s] or castles or H.P. Lovecraft-type environments [in his works]. They were just about normal people who had something bizarre happening to them in the neighborhood.”