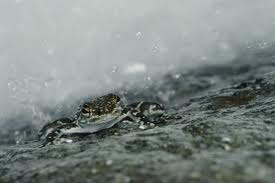 Many scientists believe that tornadic waterspouts—a tornado that forms over land and travels over water—may be responsible for frog and fish rainfalls. Other scientists theorize that any unusually powerful updraft could lift small organisms or organic material into the sky during a storm. (An updraft is a wind current caused by warm air from high pressure areas near the earth rising into cooler, low-pressure areas in the atmosphere.)

Of course, if you are Stephen King, the frogs have teeth and appear in an annual rainfall to prey upon their skeptics... (See his short story “Rainy Season” in Nightmares and Dreamscapes.)

If you're interested in taking a look at frog and fish rainfall, there are numerous YouTube videos on this subject.


This is the third in a series of posts featuring masters of horror. In this post, I'll discuss Bram Stoker, the author of Dracula.

Although Bram Stoker was not the first Victorian-era writer to deal with the vampire theme, his 1897 novel Dracula is recognized as a classic in terms of its pervasive influence on the horror genre. Stoker was a prolific short story and novel writer, as well as the business manager of the Lyceum Theatre in London. He was also a member of the literary staff of London's Daily Telegraph.

Prior to writing Dracula, Stoker spent several years researching European folklore and mythological stories of vampires. Like Mary Shelley's Frankenstein, Stoker's novel is epistolary in form, using a series of letters and different points of view to recount the story of Count Dracula, who attains immortality by draining the blood of his victims. Dracula also deals with the themes of man's desire for immortality versus the transitory nature of his existence; his lust for forbidden knowledge; and the epic battle of good versus evil.

The Legacy of Dracula
The legacy of this novel has been immense. The vampire has become synonymous with horror in the popular imagination, and the concept of the “Undead” (which was the original title of the novel), an evil entity that cannot be destroyed but rises up again and again, is central to the horror genre. There have been over two hundred films based on the Dracula character. In literature, the novel has influenced such diverse writers as Stephen King and Anne Rice. The Horror Writers Association bestows the Bram Stoker Awards each year for excellence in horror writing.

If you would like to [re]discover Dracula, please see the Bram Stoker website at http://bramstoker.org/ for copies of his works, as well as biographical information. Dracula is in the public domain and is available for free download through various sites on the Internet.