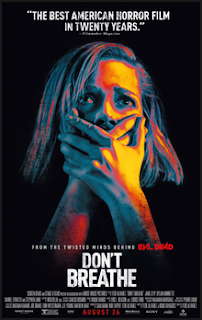 The Horror News Network reports that the movie Don't Breathe has already grossed more than $26 million at the box office, exceeding the studio's expectations. It has an 86% rating on Rotten Tomatoes, which notes that:

Don't Breathe smartly twists its sturdy premise to offer a satisfyingly tense, chilling addition to the home invasion genre that's all the more effective for its simplicity.

Stephen Lang, whom you may remember from the short-lived but excellent series Terra Nova, plays the lead in the film.


On other fronts, fans of Bruce Campbell can enjoy the first season of Ash vs. Evil Dead which is now available on DVD/Blu-ray. Season 6 of The Walking Dead has also been released, although if you've missed episodes and can wait until October, AMC will no doubt show Season 6 as a lead-in to the new season premiering on October 23.

There's lots of horror to come!

A Review of The Devil Will Come by Justin Gustainis 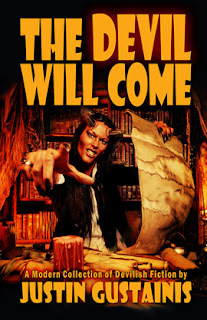 I received an ARC of this book through the LibraryThing Early Reviewers Program in exchange for an honest review.

Twenty-one stories that will scare you to death.

You may or may not believe in the old gentleman known variously as Lucifer, the Prince of Darkness, Satan, or simply the devil – but it is impossible to deny the existence of evil in the world. And all those arguments about whether evil originates in the fires of Hades or in the smoldering heart of humankind don’t change the fact that evil has always been with us – and, most likely, always will be.

The stories you are about to read are about evil, in one form or another. Several of them give evil a supernatural origin, but others place it squarely in the lap of ordinary (or maybe not so ordinary) human beings. Some of the people you are about to meet will overcome the evil that confronts them, while others won’t be quite so fortunate. Either way, all of them are going to be changed by the encounter.
These stories are best read late at night, preferably while you’re alone in the house. I recommend leaving only a single light on. Try to use a reading lamp that illuminates the page while throwing the rest of the room into shadows – shadows where anything might be hiding.

Later, as you lie in the iron dark, waiting for sleep, perhaps you’ll start to wonder if there really is a Devil, and if this is the night he might choose to come – for you.

I wish you pleasant dreams.

Justin Gustainis has been an Army officer, speechwriter and professional bodyguard. He is currently a college professor living in upstate New York. He is the author of The Hades Project, Black Magic Woman, Evil Ways, Hard Spell and Sympathy for the Devil. He has also published a number of short stories, two of which won the Graverson Award for Horror in consecutive years. He is a graduate of the Odyssey Writing Workshop.

This is an entertaining collection of short stories that examines the Devil in his various guises.

The author uses both historical and literary references--Jack the Ripper, Nazi Germany, Bram Stoker's Dracula, Marlowe's Doctor Faustus, and Stephen King's Carrie, to name a few examples--as backdrops to his depictions of evil.

I especially enjoyed the stories in which the author combines the paranormal with crime fiction, as well as those with plot twists.

This collection will appeal to readers of supernatural, paranormal, and horror fiction. 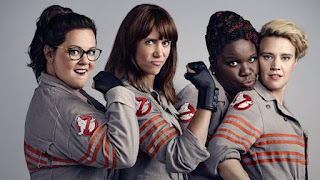 We see it again and again: an inferior sequel to an original movie in an attempt to create a franchise and earn more money for the studios. For me, it was the disappointing sequels to Alien and Aliens, in my mind among the best science fiction/horror movies ever created. You can probably think of many other examples.

It is not surprising, then, that Horror News Network reports there will be no sequel to the new Ghostbusters movie, as originally promised by the studio. There are diminished returns at the box office, as well as dwindling fan interest. Sony, with its partner Village Roadshow, is preparing for steep losses after spending an exorbitant amount in advertising costs for the new movie. Sony is now focusing on the lucrative animated film/television market.

For the full text of the article, please see http://www.horrornewsnetwork.net/ghostbusters-box-office-sinks-plans-sequel/.

Am I the only one who is sequel-fatigued? Obviously not. . .
Posted by Michael J. McCann at 00:00 No comments:

Books for the Dog Days of Summer

If you're heading for the cottage or beach and are looking for some good books to take with you, here are a few of the 2016 horror releases that you might like to consider:

End of Watch by Stephen King - This is the third and final book in the Bill Hodges' trilogy, the first two being Mr. Mercedes and Finders Keepers. Brady Hartsfield, responsible for the Mercedes massacre, has spent five years in a vegetative state in a traumatic brain injury clinic. But he is now awake and possesses deadly new powers. He is planning revenge not only against Bill Hodges--the hero of the previous two novels--and his friends but against an entire city.

Disappearance at Devil's Rock by Paul Tremblay - A fourteen-year-old boy vanishes without a trace, and the ensuing search turns up nothing. But his ghost keeps appearing, as well as random pages from his journal. This book has been described as a blend of literary fiction, psychological suspense, and supernatural horror.

Fellside by M.R. Carey - Fellside is a maximum security prison on the edge of England's Yorkshire moors. It's the kind of place where even the walls whisper. And for Jess Moulson, one of the voices belongs to a young boy who says he has a message for her.

Medusa's Web by Tim Powers - A haunted house in the Hollywood Hills is the backdrop for this tale of speculative fiction in which a man must uncover cult secrets to save his sister, who has fallen under the spell of the house.

The Fireman by Joe Hill - Please see my previous post which featured this novel.
Posted by Michael J. McCann at 00:00 No comments: