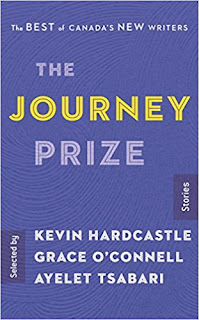 Like the O. Henry Prize Stories, the Pushcart Prize, and the Best American Short Stories series, the Journey Prize Stories is one of the most celebrated annual literary anthologies in North America. For almost 30 years, the anthology has consistently introduced readers to the next generation of great Canadian authors, a tradition that proudly continues with the latest edition published in October 2017. With settings ranging from wartime China to an island off the coast of British Columbia, the ten stories in this collection represent the year's best short fiction by some of our most exciting emerging voices.

A young boy who believes he is being stalked by an unstoppable, malevolent entity discovers that he may not be the only one. In a sweeping story set against the fall of Shanghai during the Second Sino-Japanese War, a pregnant woman waits anxiously for her doctor husband to leave the city before it's too late. A river that runs through a First Nations community is the source of sustenance, escape, and tragedy for a girl and her family. The haunting footage of the politically motivated self-immolation has unexpected reverberations for a Tibetan-Canadian woman dealing with multiple conflicts in her own life. A man who works a back-breaking job at an industrial mat cleaning service is pushed to his limit. When her mother has to return to Kinshasa to bury a family member, a girl gradually learns of the intricacy and depth of grief, in an evocative piece that illuminates the cultural gaps common within immigrant families, and the power of food and stories to bridge them.

Source: Amazon.com
Posted by Lynn L. Clark at 14:13 No comments:

An unspeakable crime. A confounding investigation. At a time when the King brand has never been stronger, he has delivered one of his most unsettling and compulsively readable stories.

An eleven-year-old boy’s violated corpse is found in a town park. Eyewitnesses and fingerprints point unmistakably to one of Flint City’s most popular citizens. He is Terry Maitland, Little League coach, English teacher, husband, and father of two girls. Detective Ralph Anderson, whose son Maitland once coached, orders a quick and very public arrest. Maitland has an alibi, but Anderson and the district attorney soon add DNA evidence to go with the fingerprints and witnesses. Their case seems ironclad.

As the investigation expands and horrifying answers begin to emerge, King’s propulsive story kicks into high gear, generating strong tension and almost unbearable suspense. Terry Maitland seems like a nice guy, but is he wearing another face? When the answer comes, it will shock you as only Stephen King can. 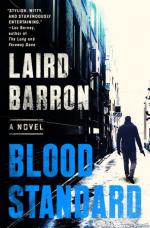 Award-winning author Laird Barron makes his crime fiction debut with a novel set in the underbelly of upstate New York that's as hardboiled and punchy as a swift right hook to the jaw--a classic noir for fans of James Ellroy and John D. Macdonald.

Isaiah Coleridge is a mob enforcer in Alaska--he's tough, seen a lot, and dished out more. But when he forcibly ends the moneymaking scheme of a made man, he gets in the kind of trouble that can lead to a bullet behind the ear. Saved by the grace of his boss and exiled to upstate New York, Isaiah begins a new life, a quiet life without gunshots or explosions. Except a teenage girl disappears, and Isaiah isn't one to let that slip by. And delving into the underworld to track this missing girl will get him exactly the kind of notice he was warned to avoid. (May 29th release date) 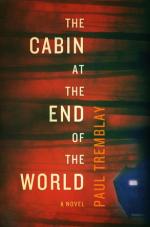 The Bram Stoker Award-winning author of A Head Full of Ghosts adds an inventive twist to the home invasion horror story in a heart-palpitating novel of psychological suspense that recalls Stephen King’s Misery, Ruth Ware’s In a Dark, Dark Wood, and Jack Ketchum’s cult hit The Girl Next Door.

Seven-year-old Wen and her parents, Eric and Andrew, are vacationing at a remote cabin on a quiet New Hampshire lake. Their closest neighbors are more than two miles in either direction along a rutted dirt road.

One afternoon, as Wen catches grasshoppers in the front yard, a stranger unexpectedly appears in the driveway. Leonard is the largest man Wen has ever seen but he is young, friendly, and he wins her over almost instantly. Leonard and Wen talk and play until Leonard abruptly apologizes and tells Wen, "None of what’s going to happen is your fault". Three more strangers then arrive at the cabin carrying unidentifiable, menacing objects. As Wen sprints inside to warn her parents, Leonard calls out: "Your dads won’t want to let us in, Wen. But they have to. We need your help to save the world."

Thus begins an unbearably tense, gripping tale of paranoia, sacrifice, apocalypse, and survival that escalates to a shattering conclusion, one in which the fate of a loving family and quite possibly all of humanity are entwined. The Cabin at the End of the World is a masterpiece of terror and suspense from the fantastically fertile imagination of Paul Tremblay. (June 26th release date)

Source: Amazon.com
Posted by Lynn L. Clark at 08:45 No comments:

Email ThisBlogThis!Share to TwitterShare to FacebookShare to Pinterest
Labels: Blood Standard, crime fiction, horror, Laird Barron, Paul Tremblay, Stephen King, The Cabin at the End of the World, The Outsider

The Sinking of the RMS Titanic

Among the finds at a book sale last fall, my husband discovered a 1955 paperback on the sinking of the RMS Titanic by Walter Lord entitled A Night to Remember. It remains one of the most authoritative accounts of the tragedy and inspired a movie in 1958 by the same name, which you can view online.  It's worth the watch.

Today marks the 106th anniversary of the ship's sinking, but its story never seems to grow old. If you've never read Thomas Hardy's "The Convergence of the Twain," you might want to check it out. The poem's imagery of the iceberg forming in the ocean while shipbuilders are constructing what they believe to be an unsinkable ship is striking. The sinking of the Titanic was the perfect subject for the fatalistic Hardy.

What struck me the most about Walter Lord's account of the sinking is how the ship was a perfect microcosm of the class system that existed at that time. More than 1500 passengers died while there were only 710 survivors. The class of the passenger in fact determined their survival: the death rate of steerage passengers was much higher than those in first class quarters. It  was women and children first in the lifeboats, but many of those in third class--locked below in the ship--never had the option of boarding one. Seventeen per cent of first class children were lost as opposed to 66 per cent of third class children. Three per cent of first class passenger women were lost as opposed to 54 per cent in third class quarters. Many of the lifeboats departed the vessel only half full.

The class distinction persisted even in death. When Canadian rescue ships started on their mission to recover bodies, they discovered they didn't have sufficient embalming supplies. (Under regulation, bodies were required to be embalmed before being returned to port.) They preserved the bodies of the obviously well-to-do passengers for burial in Halifax, while abandoning the others to their watery grave.

The scope of the tragedy was compounded by many factors: there were not enough lifeboats for the passengers onboard; the myth of the unsinkability of the ship led many to believe that they were in no real danger;  numerous ice warnings were not given enough credence by the radio operator, who was busy sending out  messages from the millionaires aboard to families and friends, crowing about their presence on the Titanic's maiden voyage; and the practice of the time to have radio operators available only on a part-time basis meant that the SS Californian, only a few miles away, did not receive the Titanic's distress messages. (The ship's crew also watched, but ignored rockets from the Titanic because they weren't the usual colour of flares denoting distress.)

In retrospect, there seemed to be an inevitability about the ship's tragic end. In fact, there was a novella published by Morgan Robertson in 1898 in which many of the details of the later sinking of the Titanic were foreshadowed.

Is there truly such a thing as fate?

Email ThisBlogThis!Share to TwitterShare to FacebookShare to Pinterest
Labels: A Night to Remember, RMS Titanic, The Convergence of the Twain, Thomas Hardy, Walter Lord 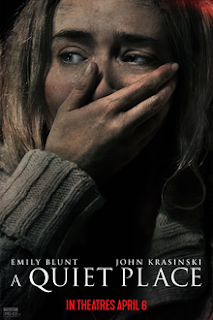 Released on April 6, 2018, in the United States and Canada, this film has already garnered an almost perfect score on Rotten Tomatoes with excellent reviews from critics and movie-goers alike.

The film is directed by John Krasinski, who also stars in the movie along with his real-life wife, Emily Blunt. It has an intriguing premise: in a dystopian world, a family must flee to the woods, where creatures hunt their targets by sound. If they hear you, they hurt you.

In addition to considering his film a metaphor for parenthood, Krasinski compared the premise to US politics in 2018, "I think in our political situation, that's what's going on now: You can close your eyes and stick your head in the sand, or you can try to participate in whatever's going on." (Source: Wikipedia)

To view the trailer, please click here.
Posted by Lynn L. Clark at 00:00 No comments:

The Portal & The Experiment 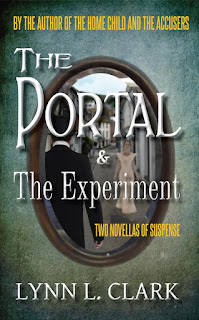 My apologies for the length between posts. I hope to start blogging regularly again.

I'm pleased to announce that my fourth book, The Portal & The Experiment: Two Novellas of Suspense, is now available in e-book format and will shortly be published in paperback.

This is my first venture into the use of first-person narrative, and I hope you will like the book. As in my previous novels, I've used elements of the supernatural, as well as extra-sensory perceptions. I added the element of a "chase" to the second novella, "The Experiment," something I always enjoy in a suspense novel.

Here's a synopsis of the two stories:

THE PORTAL - As a young girl, Emily Montfort invented a mythology of her own, but as an adult caring for her mother, who is dying of Alzheimer's disease, she knows that flights of fancy are a luxury she can no longer afford. Still grieving after her mother's death, Emily hires Carrie, an exuberant young woman, to help her run the antique shop she's inherited from her mother. Emily prides herself on her practicality, living in an apartment above the shop in a closely circumscribed world. But one day she discovers that the mirror on an antique dresser reflects more than her pale, sad face and that there may be a world beyond the practical and sensible inviting her to enter its portal.


THE EXPERIMENT - Jack Booth is an empath who's been made to feel like an outcast by his own mother. But now he's bonded with five other university students who possess extra-sensory powers in an experiment that's supposed to map the potential of the human brain. Under the direction of the self-professed transhumanist Dr. Derek Avery, the sky seems to be the limit until Jack and his fellow subjects find themselves trapped in an abandoned asylum with no potential for escape, and the purpose of the experiment no longer seems quite so noble.


The book is available online at https://www.amazon.com/Portal-Experim....