Halloween as a Kid 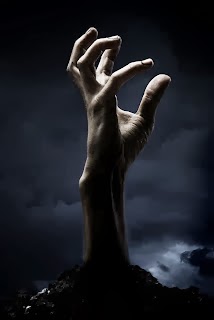 
When I was a kid, the excitement leading up to Halloween night was second only to that of Christmas Eve. The leaves had fallen and made a wonderful noise when you tramped through them; summer was a memory but hockey season had begun; and it was cold out there with just a costume, but somehow as a kid I never noticed. The really rich kids had store-bought costumes, but I had more fun dreaming up my own. My mom and dad were always great sports: helping me out and proclaiming that this year's costume was even scarier than last year's.

The secret of which costume you would wear was, of course, guarded as closely as Fort Knox. There were also the stories--shared among friends--of past Halloweens: which houses had the scariest decorations or the meanest dogs; which neighbors gave out apples (to be avoided because they were healthy); and which people dished out the real goods (bags of chips and small chocolate bars that you could count afterward to see if you had surpassed last year's record).

Halloween Day seemed endless until the school bell rang and I grabbed my UNICEF box and headed home to “get ready”. Having graduated to bigger kid status, I could go out with some neighborhood friends. We timed it to avoid the little kids walking with their parents when there was still daylight, at one end, and the teenagers who came out when it was really dark, at the other. The mean ones would try to frighten you and steal your candy. I learned from experience to make a tight knot in the top of the white pillowcase my mom had sacrificed to the Halloween cause. Then I could run like heck when the teenagers approached, and the knot helped me avoid losing any of that precious candy.

Halloween was the Great Equalizer because you got neat stuff regardless of whether you were rich or poor (or had a “lame” costume). And you didn't even have to give up that carefully-guarded paper route money and buy gifts in return. Of course, there was the odd house with “old people” who wanted you to reveal who you were or sing a song for the candy, but a seasoned kid knew how to avoid these places.

And then when my friends and I were so tired that we decided to forgo the last of the houses, we would trudge back to our homes to examine our loot. I would proudly display the night's booty to my parents, who would then let me pick out some favorite treats and eat them before going to bed.

And if I was really lucky, I could make that stash last until that other great day came and my Christmas stocking brought more candy.

Although "Happy Black and Orange Day" doesn't  have quite the same ring as "Happy Halloween", the term has been adopted by a growing number of school boards across Canada, as well as some in the United States. Apparently, it is feared that the celebration of Halloween, with its pagan roots, may offend some religious groups (or, conversely,  be seen as "religious" in nature). So Halloween has now become Black and Orange Day, Orange and Black Day, Spirit Day, or Autumn Celebration Day. Many schools are banning costumes outright or suggesting that students dress in orange and black to celebrate the day.

Somewhere along the way, the fun of Halloween seems to have gone by the wayside in the name of political correctness. For my part, I have many fond memories of Halloween, and I would like to see children continue to have the opportunity to revel in the excitement and wonder of this time of year.

Happy Thanksgiving to those readers who celebrate the holiday today. I'd also like to advise you of some ongoing Halloween events in which I'm happy to participate.

The Horror Writers Association (HWA) is once again sponsoring a month-long Halloween Haunts feature on their Dark Whispers blog at http://www.horror.org/blog/.

The HWA has also set up a Facebook event page at https://www.facebook.com/events/14177.... This page provides updates on Halloween Haunt posts and giveaways by your favorite horror writers.

If you're interested in sharing my reminiscences of Halloween as a kid, my post will appear in Halloween Haunts on October 16. I will also be giving away five digital (Kindle) copies of The Ghost Man. 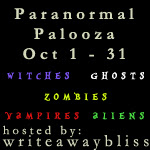 The YA author Ruth Silver is hosting a Paranormal Palooza this month on her blog Write Away Bliss, featuring books which have a paranormal element to them. The Ghost Man will be featured on October 26 if you'd like to check out my submission. The weblink is http://writeawaybliss.com/.


A special thanks to the HWA and Ruth Silver for making these features available to writers in the horror/supernatural genre!

Paranormal Palooza will feature books with a paranormal element to them, including but not limited to: werewolves, vampires, zombies, witches, warlocks, ghosts, bigfoot, and aliens. - See more at: http://writeawaybliss.com/paranormal-palooza-coming-in-october/#sthash.jeqKEyMk.dpuf


Paranormal Palooza will feature books with a paranormal element to them, including but not limited to: werewolves, vampires, zombies, witches, warlocks, ghosts, bigfoot, and aliens.
If you’re an author, please choose a button and add it to your website.

- See more at: http://writeawaybliss.com/paranormal-palooza-coming-in-october/#sthash.jeqKEyMk.dpuf
Posted by Michael J. McCann at 00:00 No comments: 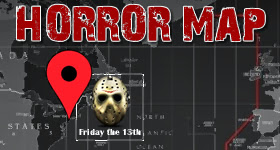 We're back after a short hiatus and getting geared up for Halloween! As our first post, we'd like to advise you of a new feature on the Horror News Network, which is one of the largest horror news and resource websites on the Internet. Please see the news release reprinted below:

“The Horror Map is a fantastic resource for fans of the horror genre,” said Rob Caprilozzi, owner of Horror News Network. “Our staff has pinned over 500 horror films to the map including favorites such as Rosemary’s Baby, Scream, Nightbreed, Friday the 13th, Halloween and more.”

The map uses Google Map technology to provide viewers with easy access to the location of more than 500 movies from the Horror News Network database. Each location also provides an overview of the movie, including the release date and a brief synopsis. Registered users, fans and filmmakers are able to contribute to the resource by pinning the location of any movie that is in the Horror News Network database. For movies not already in our database, the registered user can easily add the movie before pinning it to the map.

The map is available on HorrorNewsNetwork.net and can be accessed directly at the following link: http://horrornewsnetwork.net/horror-map.


A special thanks to Rob Caprilozzi for providing us with a copy of this press release.
Posted by Michael J. McCann at 15:50 No comments: