I was scrolling through the television listings yesterday afternoon and chanced upon The Changeling--not to be confused with the 2008 movie of the same name but with different subject matter--and felt compelled to stop and watch it once again. I've seen it about eight times, and I'm sure I'll watch it again.

What's so striking about this movie is its excellent cast, including George C. Scott as the protagonist, and its atmosphere. Very few movies have evoked such a strong theme of loss, sadness, and regret. The sets are stunning, and the panning, wide-angle shooting of scenes in a huge house ironically creates a sense of a world closing in on itself. The sound effects and music are also effectively used to heighten the tension. And what makes it even more credible as a horror/supernatural film is the believability of Scott as the central character. This is not a man easily given to flights of fancy: this is someone looking for rational explanations and ultimately being unable to find them.

As one critic wrote of the film:" [It is] a solidly made, genuinely creepy and effective ghost story of a type the movies rarely attempt and even more rarely get right." (Ken Hanke)

If you haven't had the opportunity to watch this classic of psychological horror, please check it out. It's one of those movies that never seem dated despite the fact that it was made almost 40 years ago.
Posted by Lynn L. Clark at 09:26 2 comments:

Here are some recent horror releases. (All product descriptions in this post are taken from Amazon.) 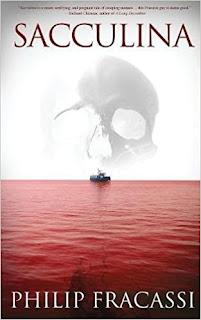 
"The story is exciting, and terrifically scary." -- The New York Times

"SACCULINA is a smart, terrifying, and poignant tale of creeping menace. I devoured it in one frenzied sitting... this Fracassi guy is damn good." --Richard Chizmar, author of A Long December and co-author (with Stephen King) of Gwendy's Button Box

When Jim's big brother Jack is released from prison, the brothers--along with their broken father and Jack's menacing best friend--decide to charter an ocean fishing boat to celebrate Jack's new freedom.

Once the small crew is far out to sea, however, a mutant species rises from the deep abyssal darkness to terrorize the vessel and its occupants.

As the horror of their situation becomes clear, the small group must find a way to fend off the attack and somehow, someway, return to safety; but as the strange parasitic creatures overrun them, they must use more extreme - and deadly - measures to survive. 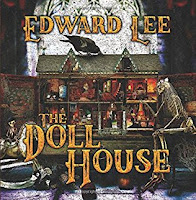 
WELCOME TO THE PATTEN MANOR HOUSE.

It’s a horror house, a slaughter house, a devil house. And it’s something else, too:

Reginald Lympton collects doll houses, and now that he’s acquired the rare Patten Doll House, he can boast the most preeminent collection in the world. But after visions too abominable to reckon, and nightmares blacker than the most bottomless abyss, he discovers in short order that his acquisition is not a prized collector’s item at all but a diabolical thoroughfare designed to serve the darkest indulgences of the King of Terrors.

Now, Edward Lee, the master of hardcore horror, has penned this audacious homage to the master of the Victorian ghost story, M.R. James.

To check out reviews in The Horror Fiction Review, please click here. There are a number of other books reviewed as well that might pique your curiosity.