I'm currently watching Season 2 of The Last Ship and was pleased to see that it was renewed for another season scheduled to start on June 12, 2016.

The premise of the series, which is based on a novel of the same name by William Brinkley, is that after a global viral pandemic wipes out over eighty percent of the world's population, the crew (consisting of 218 men and women) of a lone, unaffected US Navy guided-missile destroyer, the fictional USS Nathan James, must try to find a cure, stop the virus, and save humanity.

As post-apocalyptic adventures go, the series focuses less on the horrors of the disease and more on finding and disseminating the cure. There are no zombies as in The Walking Dead and Fear the Walking Dead, but there is a great deal of suspense based on the constant thwarting of enemy vessels and colonies trying to get the cure for their own political ends. The acting is also top notch.

(Source: Wikipedia)
Posted by Michael J. McCann at 00:00 No comments:

An Interview with Joe Hill

There's an interesting interview with Joe Hill on NPR in which he talks about his latest book, The Fireman, a plague novel that he says was influenced by The Stand. Hill also talks about his happy childhood and his constant exposure to story-telling that inspired his choice of careers.

The Bram Stoker Award® winners were announced yesterday. In case you missed the announcement, here's the list:

Congratulations to all of the award winners.
Posted by Michael J. McCann at 00:00 No comments: 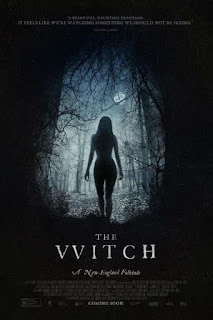 Our fascination with witchcraft continues unabated. Is it the special ability of persons to control their environment and events that intrigues us? Or maybe there's a much simpler explanation: witches are downright scary, and who doesn't like the catharsis of a good scare from time to time?

The Witch has an 83% rating on Metacritics and will be available in DVD and Blu-ray format on May 16.

In this exquisitely-made and terrifying new horror film, the age-old concepts of witchcraft, black magic and possession are innovatively brought together to tell the intimate and riveting story of one family's frightful unraveling.

Set in New England circa 1630, The Witch follows a farmer who get cast out of his colonial plantation and is forced to move his family to a remote plot of land on the edge of an ominous forest rumored to be controlled by witches. Almost immediately, strange and unsettling things begin to happen-the animals turn violent, the crops fail, and one of the children disappears, only to return seemingly possessed by an evil spirit.  As suspicion and paranoia mount, everyone begins to point the finger at teenage daughter Thomasin. They accuse her of witchcraft, which she adamantly denies...but as circumstances become more and more treacherous, each family member's faith, loyalty, and love will be tested in shocking and unforgettable ways.


To watch a trailer, please click here.
Posted by Michael J. McCann at 00:00 No comments:

Email ThisBlogThis!Share to TwitterShare to FacebookShare to Pinterest
Labels: horror films. The Witch

Guests of honor include Jack Ketchum, R.L. Stine, and many other distinguished horror writers.

The winners of the Bram Stoker Awards® will be announced at a special banquet during the convention.

A feature of the convention is Horror University, a series of presentations and workshops "run by some of the best and brightest in the horror field".

And stay tuned for a subsequent blog post on the Bram Stoker Award® winners.