If you're stocking up on horror reading material, here are some recent or upcoming releases that sound promising:

Adam Nevill's Under a Watchful Eye, which was released in January, is a supernatural thriller that explores the effects of a terrifying, other-worldly stalker on the protagonist's mind as it is engulfed in paranoia.

Ania Ahlborn's The Devil Crept In was released in February. It is the story of a small-town boy investigating the disappearance of his cousin and uncovering a terrifying secret in the process.

Christopher Golden's Ararat will be released in April. This is a twist on the discovery of the ark theme: what awaits humanity inside the ship is a hideous creature with horns.

On another note, my three supernatural novels, The Home Child; Fire Whisperer and Circle of Souls; and The Accusers are available as a spring special in Kindle format for .98 ($1.32 Canadian).

Zombies with a Touch of Humour 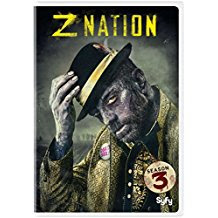 I wrote in a previous post how much I enjoyed the first two seasons of Z Nation, and I'm now watching the third. If possible, it's even campier than the first two seasons and still very enjoyable. (My only complaint is that the "new" Murphy is driving me nuts, and I hope they'll modify his character very soon.)

The show succeeds primarily because it has a strong ensemble cast; interesting story lines; and the ability to laugh at itself--something that's unheard of in The Walking Dead.  Consider this dialogue: the survivors are approaching a vintage sports car and see that there are a number of bodies inside. One of them quips: "I thought it had that new corpse smell." Or consider the parody of Donald Trump in an episode in which two presidential candidates compete to take over the post-apocalyptic world. One of them promises: "I'm going to build a wall to keep out the zombies. And I'm going to make the zombies build it themselves."

Check it out for yourself  if you're looking for something new in zombie land!
Posted by Lynn L. Clark at 00:00 No comments:

I watched The Conjuring 2 on DVD recently and really enjoyed it.  I hadn't heard of the case investigated in the movie, but was intrigued by it and decided to do some research to share with you.

This is the story behind the case:

In August 1977, Peggy Hodgson called police to her council home in Enfield, England, after two of her four children claimed that furniture was moving, and knocking sounds were heard on walls. A police constable said that she saw a chair slide on the floor and "was convinced that nobody there had touched it."  Later claims included allegedly demonic voices, loud noises, thrown rocks and toys, overturned chairs, and children levitating. These claims attracted considerable press attention, and the story was covered in British newspapers such as the Daily Mail and Daily Mirror, until reports of these incidents came to an end in 1979. (Source: Wikipedia)

The case has been widely discredited as a hoax--similar to the Amityville horror alluded to in the beginning of the film. The main reason for this is that Janet Hodgson admitted to and was caught on tape fabricating some of the events. However, she claims to have invented only 2 per cent of them because she was afraid that investigators would not believe her. She maintains to this day that the majority of the supernatural events did happen. To read a recent interview with her, please click here.

The psychic investigators Ed and Lorraine Warren, convincingly played by Patrick Wilson and Vera Farmiga, have also been dismissed as benign, but delusional in their search for ghosts and demons. But others such as Maurice Grosse of the British Society for Psychical Research steadfastly maintained the authenticity of the events. (Grosse, a character in The Conjuring 2, died in 2006.)

You be the judge after listening to the actual voice recordings at the time!